In the earlier post about Sync performance I had only tested on a small machine (namely, my trusty old laptop) simply to prove -or disprove- the experiment was valid.
I only recently got around to test on something more realistic although still not up to date. A Dell r610, two socket Intel Xeon E5520 @ 2.27GHz.


But let's look at our test setup:


This setup has 2 main advantages:


That is, to date, the best way to test the absolute best performance the Synchronization server (or any piece of software, really) can achieve on particular rig.

I'm going to cut to the chase, since this is part 2 of the series, and show you 2 things: 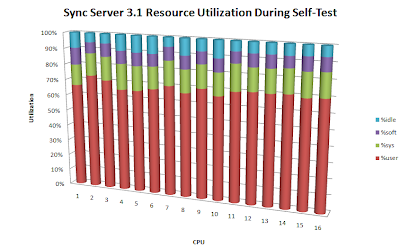 So there you go, we have 8 physical cores on this platform, and the rule of thumb is that you can get about 10,000  transactions per second per core with sync (11,058 in this case). Note too that Sync scales really well vertically and is able to take advantage of all CPUs on the machine: there is only 7.74% CPU idle overall on this machine at the time these metrics were taken!

In reality, there is going to be a few things in the way to be able to achieve such numbers:
In Part 3, I will get to how we deal with these hurdles and what you can tune to help keep the synchronization as fast as possible.
Posted by Unknown at 4:25 PM